I once tried to explain to my Grandma what I do at my SEO company in London. Now, she knows what Google is but she wouldn’t have any idea about what Google wants, as she doesn’t have access to the Internet. Then I went to a friend of mine and told her what I did. She’s an Internet savant, always up to date with the latest social media trends and stories. She was also a little bit confused. But I think my favourite reaction to hearing about SEO came from my Aunt. When I told her that SEO is a branch of digital marketing where we help clients get their website onto the first page of Google, she thought for a moment before saying: ‘but why wouldn’t you just call your website something like www.aardvark.com?’ I’m not sure how long she had thought that Google was alphabetised, but I’m glad that I finally got to set her straight that day. I think that this really goes to show that no matter how much we use the Internet, there’s always going to be something about it that we don’t quite understand.

Google is something that many of us use every single day, from serious work information to the most inane of questions. An average of 3.5 billion searches are made each day, and we put so much trust into something that we don’t really know too much about, but that we just believe is giving us the best possible results for what we want to find.

Something that many of us forget today is that Google is a company, its revenue is advertising and its customers are searchers. Like any company, what Google wants is to look after the best interests of its customers and keep them happy by giving them relevant, trustworthy answers to their questions, because this is why people come to Google in the first place. From the early days as a Stanford research project to now, Google has been improving its search engine, refining its algorithm again and again and again over time to make customers happier. Over the twenty years that the search engine has existed, it is clear that Google is making the search engine behave less like a computer, and more like a human being. 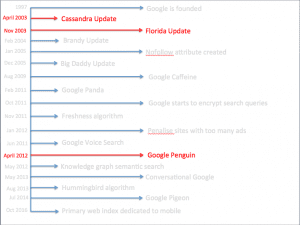 Here is an abridged list of the updates to the Google algorithm that have been made since the search engine’s founding in 1997. There have been many more tweaks and smaller adjustments in addition to these, but these updates have been the most significant, and have particularly been the most significant for SEO companies like us. Understandably, a list like this can be a bit confusing so let’s break it down a little into some of the key areas that Google has focused on when it comes to ranking its search results. These are links, keywords, and content. 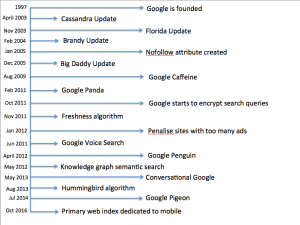 The first thing that Google wants is TRUST, as it wants its customers to know that . Now, in order for Google to provide trustworthy answers, it needed a metric to determine trust. It once settled on the number of inbound links to a site, because it believed that links were a way of recommending other sites to users, and that you wouldn’t recommend something that was untrustworthy. The process known as backlinking can be useful for SEO purposes as long as the links are natural and from reputable sites. Of course, this was also an opportunity for marketers to boost their Google rankings by artificially placing links on sites, whether via sponsorship or spam in comments sections, which would exploit Google’s algorithm to artificially push up rankings. These updates (marked in red) show that Google was paying attention, and it didn’t like that those sites were taking advantage of its algorithm. The most significant of these updates was the Penguin update in 2012, which has had 4 revisions since. After this, not only did continuous, sponsored link building not boost your rankings, but Google actually penalised your site for it in the rankings. The update affected about 12% of indexed sites, and since then link building has been knocked off its perch as the go-to SEO strategy. A lot of SEO companies say that they get clients to rank in 1 – 2 months. In terms of an SEO timeline this is very quick, and to achieve this you would have to do something that’s considered unethical in SEO circles, like sponsored link building. Once Google figures this out and de-ranks you, it’s actually much more difficult to climb the rankings again. 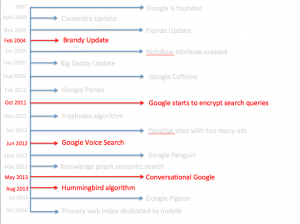 The second thing that Google is looking for is RELEVANCE. Relevance is crucial, because if searchers get what they are looking for, they will walk away happy. Keywords act as the metric for relevance, because if Google can match an entire query to a site, then it assumes that the query is answered. Like backlinking, keywords are still useful for SEO and act as signals to Google about the subject of your page. However, this strategy was again easily exploited by purveyors of black-hat SEO, who proceeded to stuff their content with as many keywords as possible, even if it wasn’t relevant to the material, to trick Google into thinking that they were more relevant than they actually are. Probably the most significant updates were these ones here (marked in red), and as you can see they are all reasonably recent. These parts of the algorithm look for content that doesn’t make sense or read naturally because a site has tried to look very relevant, or for content that doesn’t have anything to do with that actual object of the site.

Since the Hummingbird algorithm update Google is now smart enough to search for the intent of the query rather than just the keywords used, or just synonyms of the keyword. And since these revisions to the algorithm, any site that doesn’t read naturally is penalised for keyword stuffing. Don’t get me wrong, keywords are still something that Google looks for to gauge relevance, but always in moderation.

The final piece to the Google puzzle is EXPERTISE. Probably the most significant updates over the past twenty years have been these, because they have cemented exactly what Google wanted – that content is king in the world of search engines. First there was Google Panda – an update that penalised sites with thin or low quality content. Remember, Google is only interested in the satisfaction of its customers. Sites that don’t contribute anything aren’t what Google is looking for, and they are penalised for it. For us, one of the most important revisions was the freshness update. On time sensitive queries – like product reviews or style guides where you always want the most up to date information – Google prioritises sites with newer and fresher content and information. Long form articles that show off your expertise in your field – known as skyscraper content – are far more likely to rank highly compared to thinner content that involved less effort.

Now that we have a pretty good idea of the what, we now ask the question why. Why has Google set up its search engine the way that it has? All of this – the trust, the relevance, and the expertise – is to benefit Google’s philosophy of making sure that their customers are able to find the best information as easily as possible. The sites that rank in the top three and receive by far the largest amount of traffic are the best for the EAT criteria: expertise, authoritativeness, and trustworthiness. They have a satisfying amount of high quality main content on their page, and a positive reputation. Google’s main goal in making these tweaks to its algorithm is to improve sites in its results overall, rather than sites simply catering to the smaller changes and adjusting them bit by bit. By improving overall sites, Google can try to improve the Internet. While it is admittedly a lofty goal, Google’s process is a pretty solid one.

How To Find What Google Wants