As promised in the title, this blog post will explore why clickbait occurs, how is bad for your SEO and brand authority and what Google is doing about it. So rest assured, you haven’t been clickbaited.

What are clickbait headlines and why do people use them?

Clickbait headlines are overpromising and controversial statements which use hyperlink texts or thumbnail links, enticing users to click-through to the linked piece of content. These are intentionally designed to ignite curiosity within the user to gain clicks, but turn to be misleading and deceptive once the user realises they’ve been directed to unrelated, unrealistic or false webpage content.

Some examples of clickbaits that we can easily fall victim to are shown below.

How clickbait ties in with Black-Hat SEO

Practices that fall under Black-Hat SEO are those that go against Google’s ranking guidelines. An example of this is through Doorway pages, where users fill sites with keywords and Call-to-Actions (CTA’s) for ranking purposes, but the content itself holds minimal value to readers. Further, page clicks that redirect the user to different landing pages is also a product of Black-Hat SEO. Read more about Black-Hat SEO examples here.

According to Twinword, click-baiting is a black-hat SEO technique, as it deceives users for the purpose of increasing a website’s click-through rate (CTR).

Why clickbait can diminish your brand’s trust

You’ll find many blog posts and articles circulating the web that promote clickbait for increasing clicks and improving SEO. However, the most overlooked factor in all of this is how you can diminish brand authority in the process. Here’s why: 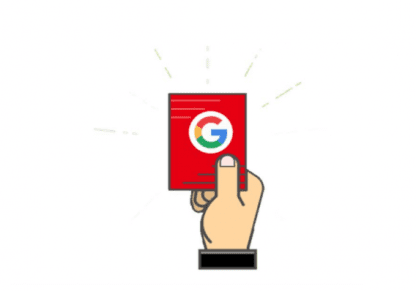 With each year, Google grows smarter in detecting Black-Hat SEO occurrences. If users click on a misleading title they will return to Google and undertake the same search again. If multiple users do this, Google knows the article was not relevant nor helpful and will de-rank the site.

It was reported that Expedia lost 25% of its visibility on Google as a result, and suffered a share price reduction of 4%. Although the length of the Google penalty is unknown, Onely claims it took Expedia a number of months to regain SEO traffic. Google would never usually comment on these claims, however many SEO reporters, bloggers and analysts have shared evidence and insights to support this. For starters, Expedia’s Google traffic decline is supported by the below SEO visibility graph: 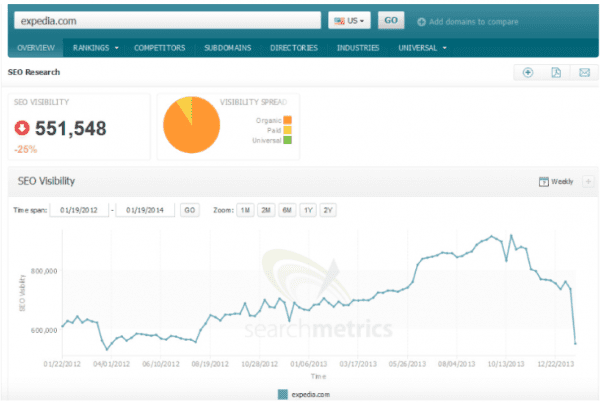 There was a steep decline in SEO visibility in the late December 2013/early January 2014 period. The ranking positions table below also shows us that strong short head keywords had declined during this time: 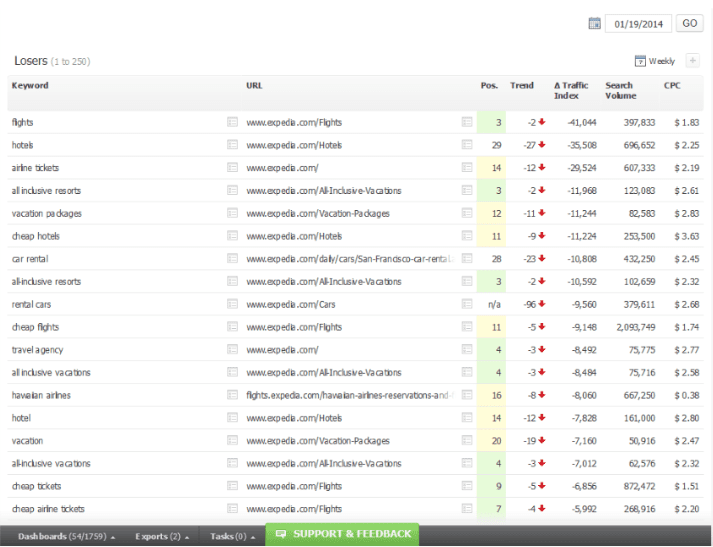 The below table shows the estimated traffic decline of each of the biggest losing URLs based on short head rankings:

Considering Expedia’s extensive brand awareness globally, this is a dear price to pay for deceptive SEO tactics. A key takeaway from this case is that improving your CTR shouldn’t be at the expense of brand authority.

Considering the opposing view
There are some who argue that posting clickbait headlines to engage more page visits is not necessarily bad, as long as the content is relevant. Content Marketing Institute explores both sides of the clickbait debate in this recent post. A major argument here is that there is potential for clickbait to be positive, as long as it creates value for the user by being entertaining and thought provoking.

“Clickbait gets a bad rap. When done correctly, it’s one of the best ways to get people to take notice and give you their most precious asset: attention.”

If we too support this theory, then we must accept that the key to effectively (and ethically) gaining clicks is writing authentic headlines.

Tips for writing compelling and authentic headlines instead of clickbait

According to Eman Zabi, writing a “killer headline with and hook” and following through with an equally good article is the trick to authenticity. She also suggests to write at least 10 headlines then shortlisting the best one.

Lastly, if your content encapsulates a unique or niche idea, Neil Patel highly recommends embracing controversy, but without exaggeration.

In an SEO battlefield of clicks, impressions and rankings, there is no doubt that quality, engaging content is the golden ticket to success. However, this poses a real challenge in implementation.

Therefore, find ways to use click-baiting for good, stay informed of both White and Black-Hat SEO characteristics and ensure your website falls under the right SEO umbrella, which keeps you on Google’s “good list”.

If you’re interested in finding out more SEO tips read our last blog, or check out SEO TV.

Why Clickbait Is Bad For SEO & Brand Authority